Love & War in a Sad Time: Philosophical and Psychoanalytic Inventions 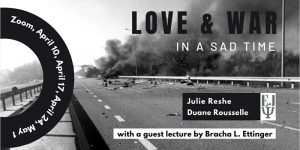 War has now become our reality. It is no longer a ‘knowledge’ transmitted to us from history books and assessed as if from a calm distance. We cannot escape its horrors. Millions of people lost their homes, thousands were killed – and violence continues. A painful knowledge is actively constructed by each one of us, shared through our conversations. This three-weeks philosophical and psychoanalytic lecture and discussion series will explore the following two questions: (1) what knowledge is relevant to what is at stake in times of war?, and (2) how can love survive a war? Join us as we try to invent a way to address war in a time of war.

We shall meet for four consecutive Sundays (April 10, April 17, April 24, May 1st, 2022 @ 7pm CET). We invited for the first day (April 10th) artist and psychoanalyst Professor Bracha L. Ettinger as a guest lecturer. Duane Rousselle and Julie Reshe are the respondents. The following weeks (April 17-May 1st) will be broken into an hour and a half orienting lecture by Dr. Julie Reshe and Dr. Duane Rousselle, followed by a one hour open dialogue among participants.

This event costs 30 euros (or equivalent foreign currency) per participant, or 20 euros for students. Those who cannot pay may contact purchase tickets by donation (or free). Free access for those affected by the war.

Bracha L. Ettinger, PhD, is a visual artist, writer, philosopher and training psychoanalyst whose work on what she named the feminine matrixial (matricial) space in 1985 revolutionized the field of contemporary philosophy and post-Lacanian psychoanalysis. Selected papers from the 1990s appeared in the books The Matrixial Borderspace, Proto-ethical Matricial, and Matrixial Subjectivity, Aesthetics, Ethics. Her artworks are currently exhibited at the Castello di Rivoli, Torino and the Tel Aviv Museum of Art.

Julie Reshe, PhD, is a philosopher and practicing negative psychoanalyst of Ukrainian Gypsy origin. She received her Ph.D. in Philosophy and Psychoanalysis from the Research Center of the Slovenian Academy of Sciences and Arts, where she studied under the supervision of Alenka Zupancic.

Duane Rousselle, PhD, is a Canadian sociologist and Lacanian psychoanalyst. His forthcoming book is titled Singularities: Psychoanalytic Sociology for a Strange Time. Some of his recent books include Real Love: Essays on Psychoanalysis, Society, and Religion (Atropos Books), Gender, Sexuality, and Subjectivity: A Lacanian Perspective on Identity, Language, and Queer Theory (Routledge), and Jacques Lacan and American Sociology (Palgrave).