One Hundred Years of “Group Psychology and The Analysis of The Ego”: With Addendum

The essay Group Psychology and The Analysis of The Ego failed to influence the broader cultural scene as it should have because in the last hundred years or so readings of psychoanalysis in a political key have been dominated by Freudo-Marxism. And, as we shall clearly see, this Freudian text does not play into the hands of Freudo-Marxism.

The main advocate of the latter thesis is Hegel, for whom the Objective Spirit (Objektive Geist), “the spirit in the community”, expresses a Reason superior to that of each individual subject, often manipulated by the Cunning of Reason. As for the former thesis – which expresses a deep aristocratic contempt for “the crowds” –, one of its best-known proponents is Gustave Le Bon, by whom Freud is inspired. But Freud thoroughly deviates from this age-old opposition.

Freud tries to account for any collection of people – from an improvised crowd assembled to loot a bakery to highly structured ones like the church or the army – taking as a starting point Eros, i.e., the drives. This text was conceived and written together with Beyond the Pleasure Principle and should be seen as one of the first applications of the former. In other words, a group is the product of Eros, of the impulse that tends to make individuals connect to each other. When a group breaks up, Thanatos, death drive, takes over and individuals disconnect.

Now, the essential point in Freud is that this erotic attachment always takes place thanks to a leader, a Führer. At the time the term Führer lacked the sinister connotations it has for us, but in fact, après-coup, with hindsight, we can state that Freud basically describes any group as a fascist formation. Because every group stands thanks to a process in which an external object – the Führer – replaces the Ideal Ego. Every group is based on a shared alienation: what unites us is our love for the same leader. In short, there can be no anarchic collectives: a gang of anarchists also needs a Führer to be able to function, even just as a gang.

Freud couldn’t talk about fascism at the time, of course, as in 1921 it still hadn’t established itself. But if we read correctly the diagram of group alienation as described by Freud, we can agree the it is ultimately an exact description of what we call fascism:

Conversely, Freud describes hypnosis – which he had himself practiced for years – as a crowd of two. Which simply means he believed that every group is hypnotic. “A group is a dream” Jean-Bertrand Pontalis said. But, in contrast to his predecessors, Freud wasn’t interested whether a group is or is not the sleep of reason; he was interested in saying that groups are hypnosis, and in hypnosis there is always someone who is commander, the hypnotist. In this way Freud innovated compared to a previous tradition that based groups on mutual imitation among members. Mutual imitation is not the essential point (unlike in hysteria). Collectives are not hysteric, they are fascist: they are always hypnotized by a Führer.

Some may object that this is not always true. We could say that if millions of human beings followed Stalin or Mao it’s because Stalin and Mao in turn personified an ideal: Communism. It is not enough for someone to present him or herself as a Führer, this someone must also be inspired by a shared ideal. But the point is a different one: lots of people believe in Communism, but they stay home, they don’t become involved with political parties or unions, they don’t join “groups”. For an ideal to attract a crowd, for someone to be prepared to kill or be killed for an ideal, a Führer is required. For Freud politics always exploits, to the very end, narcissistic identification with a leader.

Of course, such an image of the collective could not be accepted by Freudo-Marxism, from Fromm to Žižek, from Wilhelm Reich to Badiou, from Marcuse to Althusser… Marxism has a Hegelian mold, it believes in a collective Reason that does not culminate in fascism. Hence a certain embarrassed marginalization of this text from the official Freudian Canon.

Note that Freud himself was the Führer of a collective, the psychoanalytical one. And we know only too well, alas, how much fascism there has been in the history of psychoanalysis as an institution: expulsions, intolerance, wars of succession, conflicts over intellectual legacies.

There is, however, something missing in Freud’s theory. Something not even added by W.R. Bion, author of a group theory that restructures and enhances Freud’s.

In collectives, Freud only sees idealization processes, idealizing alienation. Had he been familiar with Carl Schmitt, he would have seen how a group is always based on the difference between friend and enemy. For Freud – who does mention armies in the essay – a group does not need an enemy; it need not necessarily elect an enemy. In actual fact, any collective is always based on a difference, which can turn into hostility or war, between an us and a them. Who the us are and who the them are is of no importance.

M. Klein spoke of a splitting of the object into good and bad. We can say that when the external Object takes the place of the Object of each of us, its idealization splits this Object, in the sense that a part of it identifies with the Ego Ideal and another part takes a different route, that of ejection, and is like thrown back into the real.

Beyond the process of idealization, therefore, we have to look at its revers, its sinister fold, which psychoanalysis hasn’t named but which I would call debasement, the reverse of idealization. Every collective self-idealization produces a discarded object, a scrap, an expulsion (which, according to Freud [“Die Verneinung”], is the matrix of the real itself), something that Lacan tried to explain, I think, with the concept of object a. Because a is certainly a scrap, a “piece of shit”, but it is also, or can also become, a splendid precious object, an Agalma, as we shall see. I therefore propose to complete the Freudian diagram as follows: 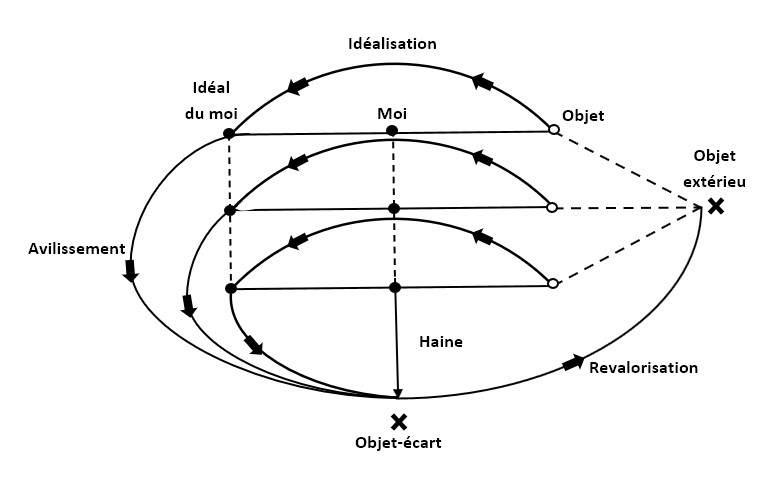 In “Mourning and Melancholia” Freud said that in melancholia the shadow of the object falls on the ego (meaning that the shadow of a hated object falls on the ego, thus the ego itself becomes hateful). In every group, insofar as it is a collective of us-versus, idealization throws as its shadow a discarded object in the overturned space of idealization. The other as discarded object will always trouble the nights of even the most tolerant groups.

And in fact, even when a society is extremely tolerant and open – for example, Norwegian society today – it produces (or finds?) an Anders Breivik, the terrorist who killed 77 people in that country in 2011. A tolerant society will always find an intolerance to quash. Terrorist intolerance is today the shadow that “soils” the idealized image of openness and tolerance that European societies offer of themselves. Intolerance always ends up producing the intolerance of the tolerant.

But this discarded object very often slips into a process which is the opposite of debasement, one I would call of “reassessment”. In this way, the discarded object, like the Lacanian object a, climbs back up to the position from which it sets itself forth as Führer. It is a mysterious process, but one that finds thousands of confirmations, particularly in religious history. I’ll limit myself to the case closest to us, to Jesus.

Significantly, the cross remains the principal symbol of the Christian faith. The cross was an atrocious form of torment that the Romans inflicted mainly on slaves and that Jesus, the outcast among outcasts, underwent. Abandoned by his disciples and by the people, Jesus sinks into the lowest condition that was conceivable at the time: the κενωσις (kenosis) that Christianity gives such great importance too. But it is precisely this absolute abjection that makes him, in the eyes of his apostles and worshippers, the Christ, the Messiah, even equivalent to God Himself. We can find this process of reassessment, often hyperbolic, of the discarded object in nearly all the Great Collectives, not only in religious ones. The discarded object turns from being an enemy into no less than the Führer of the new Collective, there where the sun of the future shines.

It could be argued that there are some absolutely good-natured and tolerant societies, like certain religious orders, like the Franciscans, for example. But the story of Francis of Assisi – sackcloths, mortification of the flesh and a crude search for an even moral mortification – shows that this extreme tolerance towards outsiders has to be paid for with an extreme intolerance towards oneself, which replaces the discarded object. But sometimes even Franciscan masochism turns outwards. Thus, in the fifteenth century the Franciscan Bernardino da Feltre actually became a ferocious persecutor of Jews, even accusing them of imaginary infanticides.

Some might argue that rigid caste systems, like the one that still prevails today in India, don’t allow this “upswing”. The Untouchables, the Dalit (the oppressed) are impure for the superior castes and are therefore given the job of cleaning up their excrements. But it is unthinkable that a Dalit could become a Führer. Yet Gandhi, who belonged to the superior castes and even supported the caste system, presented himself as the Führer of India dressing, or better, stripping down to, the robes of an Indian peasant, or rather a fakir. He needed to disguise himself as a discarded object to take on the legendary position he holds in India and beyond.

This is how what I would call the Samsara of human political alienation takes shape, the circle that never really ends, between processes of idealization and processes of debasement.

Completing the Freudian diagram in this way, we could find again a circularity accounting for historical dynamics, those that lead on the one hand to collective identifications (“us”) and on the other to conflictual struggles against the other as a scrap (“them”).

In the text of his presentation for the April 23rd 2021 webinar, Jean-Luc Nancy writes that all societies are essentially anarchist. This could appear to be the exact opposite of what I assert in my text for the same online event: I hold that, according to Freud, every Masse, every association, is fascist. But I do not find these two statements contradictory. I feel that their truth lies at two different levels.

Nancy builds on Freud’s idea that every society is the product of the elimination of a padre-padrone, as we say in Italian, of a paternal master, and as such, it is anarchist in character. But we well know that concretely societies are never anarchist, they are all, in one way or another, repressive. Precisely because there is no longer a paternal master, each of them must identify a Führer to fill this empty place. Indeed, since among higher primates there is no transcendent leader, an alpha male will dominate, taking the best females for himself and becoming feared by the other males. In short, it is not enough for someone to be « inately » a leader or a soveraign, he must gain his position at the top of the hierarchy by presenting himself as the leader of the masses, in other words, by being loved by the horde. The Freudian Führer is above all a beloved leader. In fact, in most cases fascist leaders were democratically elected, in 1923 in Italy, in 1933 in Germany… and more recently in Hungary, Russia, Brazil…

In Pasolini’s film Salò, or the 120 Days of Sodom, one of the protagonists, a sadistic fascist leader, says: “We, the fascists, are the true anarchists.”

Sergio Benvenuto is a researcher in psychology and philosophy at the National Research Council (CNR) in Rome, Italy, and a psychoanalyst.